Another day, another new technology. The world is gearing up for a shift towards HTTP/3, with good old Google leading the charge towards the noble goal of optimizing the web.

This upcoming third major revision of the of the Hypertext Transfer Protocol is based on QUIC, which is an experimental transport layer network protocol that was initially developed and pioneered by the search engine giant.

Let’s take an acronyms and abbreviations filled look at HTTP/3, and how it aims to make the web faster.

HTTP, as you are aware, is the system web browsers use to fetch data from web servers. It is the technology that is used to load web pages and other files and information from the Internet. And this third and latest version of HTTP is designed to offer a faster experience when browsing the web.

The reason for this is the use of a couple of new technologies that have recently been developed to replace the lumbering ones of yesteryear.

Basically, Google is leading the charge here with QUIC, its Quick UDP Internet Connections system that it publicly unveiled in 2013, and officially suggested three years later as a successor to HTTP/2. It employs several impressive techniques to make webpages load faster, and even ditched TCP, another mainstay of networking since olden days.

Without getting too technical,  QUIC cuts the number of times computers need to request data from a server when downloading information via HTTP .

Additionally, the technology also estimates the bandwidth connections required in advance, and then spaces the packets of data accordingly. All these little improvements and optimizations are expected to change how web serves and web browsers interact and exchange data with one another.

Before we get to further details, a few words about UDP (User Datagram Protocol), a new technology that Google has been working on. This TCP replacement is designed to make transmissions much smoother and faster by removing many of the unnecessary functions that TCP performs.

Now, you may be wondering, what took them so long to get rid of TCP? Why stick with, and use this ancient protocol for so long?

TCP (Transmission Control Protocol), is one of the main protocols of the Internet protocol suite, and has been in use in networking since 1974. A central part of Internet communications since day one, TCP is what was included in HTTP 1 and 2.

TCP is ubiquitous, and the vast majority of Internet traffic is TCP.

Reliable as it may be, the thing that makes TCP slow is that it lets servers check whether any data was lost while it was being transmitted. When you see a YouTube video buffering, it is actually your network double-checking and confirming that it has all the data it needs.

This reliability, however, makes this this less than an ideal solution when sending real-time data, where delays are unacceptable. Case in point, when chatting on Skype.

And this is exactly where UDP comes in.

Out with the old, in with the new

Getting back to QUIC, these bottlenecks are what this new technology solves. Think of this as sort of a next generation TCP, offering the same level of reliability and usage, but doing away with most of the slowdowns of that aging technology.

According to Google, when the current version of HTTP first connects to a server, it takes about 100 milliseconds. Once that done, the TLS (Transport Layer Security) needs to establish an encrypted connection, which can extend the process to 300 milliseconds.

All these numbers sound fast, but in computing and networking terms, these are like years and decades.

In contrast, QUIC can perform both these actions simultaneously. 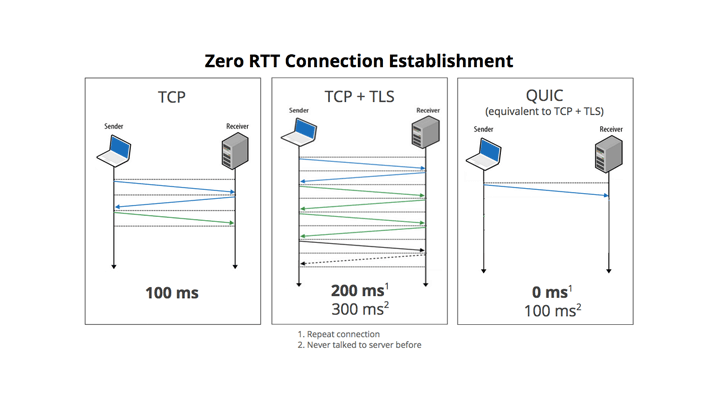 As Google illustrates in this image above, the signals bounce back and forth between your computer and the server, which eats up precious milliseconds. In comparison, QUIC only needs to send one signal to get the job done, without faffing around by transmitting data on multiple occasion.

In short, HTTP/3, powered by QUIC, cuts the number of times computers need to request data from a server, ultimately speeding up the transmissions and connectivity for everyone involved. It also improves security by including the SSL (Secure Sockets Layer) handshake in the setup. Plus, this new technology also reduces overhead in another key area, when multiple substreams are sent over a single connection.

When will HTTP/3 be used?

Soon. The transition has already begun, and slowly but surely the entire web will transition to this new standard. It was only in November 2018 that a proposal for HTTP-over-QUIC be called HTTP/3 was accepted by the IEFT, the Internet Engineering Task Force.

This independent organization was founded by the US government in 1986, and is made up from volunteers from leading technology companies. They have been overseeing the proceedings for Internet technologies since 1993.

Admittedly, development on this end has been slow, with HTTP/1.1 seeing a release in 1999, and HTTP/2 being officially out in 2015. But things are picking up pace with the release of the HTTP/3 due in 2019.

As of this writing, just 1.3% of the 10 million most popular websites in the world use HTTP/3, compared to 31% using the older, HTTP/2 technology. That’s about 130,000 sites that are transmitting data over this new standard right now.

But this number should change in the coming months and years, as adoption of the technology increases after it has now officially become a standard. Companies and developers have started to add support for HTTP/3 into their products and services — including browser makers, online services, and firms that create server solutions.

The technology is fine and dandy, but what about software? Well, Google, which has been arguing for QUIC for years now, already built it into Chrome in version 29. In case you’re wondering, this version came out all the way back in 2013, so it has been a long time coming.

As of right now, Opera is the only other browser that supports QUIC. If you use either Chrome or Opera to browse these websites that support HTTP/3, you will notice that they load web pages faster.

Other browser and software makers will, undoubtedly, add support for this new standard in due time. Particularly those based on the Chromium source code, like the newer versions of Microsoft Edge. Other platforms like Caddy web server and Lite Speed products have also integrated this new technology.

In other words, the adoption of HTTP/3 is expected to be very much similar to that of HTTP/2, in that you will see gradual improvements and rollouts without any major breaks for applications and infrastructure that runs the web.

HTTP/3, an evolution of the QUIC protocol from Google, is a major departure from traditional HTTP. Designed to work around the limitations of that protocol, HTTP/3 will serve as a combination of SSL and TCP to cut down on initial connection times and speed up the modern web.

And while it changes how users and devices access the Internet a lot, HTTP/3 is all set to take the mantle as the newest and most widespread version of the venerable Hypertext Transfer Protocol.