According to Statista, there are almost 4.2 billion active Internet users in the world as of October 2018. Most modern processes from entertainment to economies run their backbone through the Internet. The temptation for cyber-criminals to take advantage of the population becomes ever more compelling.

An antivirus software is a staple of any basic defense against threats online. However, a lot of people can be easily tricked using different methods. One such method is with a fake antivirus.

How Can You Get a Fake Antivirus

Fake antivirus programs infiltrate computer systems like any malicious software do. Email attachments are one of the most common culprits. People tend to trust and download email attachments without the same vigilance as most do when downloading files from other online sources. Moreover, there are different methods of hacking into your system which most criminals employ.

Pop-up alerts and advertisements are also common methods of compelling users to install fake security programs. Some malicious websites may trigger pop-ups that warn users of threats in their computers. It relies on scare tactics to compel you to click and install their fake antivirus program.

How to Detect Fake Antivirus

Fake antivirus programs can imitate popular security programs which makes it quite believable. It may also use its own branding and appear legitimate. Gone are the days of the funky looking interface which can give the fake antivirus away. Cyber-criminals spend time and effort to make their software appear as legitimate as possible. 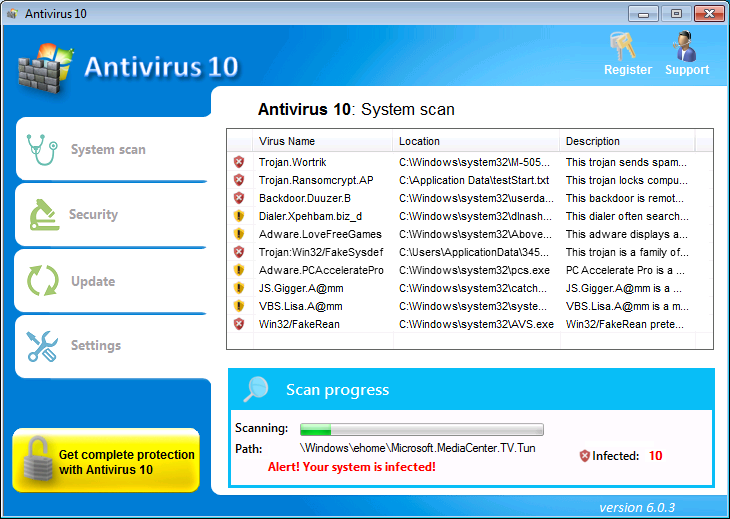 Fake antivirus programs often have fake system alerts. These are typically triggered by a Trojan. More often than not, alerts from these malicious programs are quite aggressive possibly to overcompensate its ineffectiveness. Some fake antivirus actually infects computers during its installation.

An increase of pop-ups and other alerts also come with the fake antivirus. The malware uses valuable system resources every time it creates a pop-up. Your system will significantly slow down even with very few applications running. Check your Task Manager to confirm all the running programs. If you cannot access your Task Manager from the usual methods, then it is a clear sign that your computer is infected with a virus or malware.

A significant decrease in network speed is also a sign of infection. Malicious software, such as fake antivirus programs, constantly communicate with third-party servers to wait for instructions. You can use Internet monitoring tools to best see which programs are consuming the most bandwidth.

Lastly, an increase of adverts while browsing the Internet can be a sign of infection. Additionally, if your homepage changed without you deliberately modifying it in the browser settings may indicate malicious threats in your computer. You may be redirected to websites that you haven’t visited in the past.

Typically, these websites will convince you to download more applications, enter your personal information, and even mimic other legitimate websites to gather more information about you.

How to Remove and Protect Against Fake Antivirus

Running anti-malware programs, such as MalwareFox, can remove any traces of malicious files and applications in your system. It can neutralize any potential fake antivirus software in your system.

Do not uninstall your security suite until you are certain that it is fake. You will open your computer to further attacks if you remove antivirus software without confirming that it is a malicious application.

Better yet, download toolkits from popular security providers to specifically scan your computer of fake antivirus. Stinger by McAfee, Norton’s Power Eraser, TrendMicro’s FakeAV Removal Tool, and Malwarebytes’ Chameleon are some of the tools that you can use to target fake antivirus.

Moreover, make sure that your firewall is properly set-up and installed. Windows Defender works well when it is properly set-up. Never download email attachments from unknown sources. Also, do not trust pop-ups telling you that your computer is at risk. Run your security program if in doubt. Only purchase software from reputable sources. A quick Google search will reveal if an antivirus is fake or not. Freeware is enticing, but scan the installer using your antivirus and anti-malware programs.

Experts and the online community typically review popular and reputable security programs. These are typically effective indicators. Moreover, apply basic security rules when going online. Using common sense is your first line of defense against threats looming on the Internet.