Scareware is a type of malicious software which aims to deceive users into visiting malware-infested sites, downloading potentially dangerous applications, or purchasing a bogus service. It will appear as legitimate warnings from security services typically in the form of pop-ups or messages from the operating system.

Scareware, also known as fraudware, rely on the emotional response of the user. It usually generates pop-ups that resemble error messages from legitimate security software providers. Some may even look like error messages that the operating system generates. These pop-ups will often report a slew of problems on your computer. More often than not, the error messages are enough to frighten the users to have a knee-jerk reaction to resolve the issue immediately.

Just like any malicious software, it tricks you into downloading and installing another dangerous software. Some companies also use this strategy to compel potential users into purchasing their products which are unethical. In 2008, Branch Software and Alpha Red were sued by Microsoft and the Washington attorney general for the creation of Registry Cleaner XP, a known scareware application.

Scareware is a modern iteration of the early forms of online scams. During the early days of the Internet, web pages trick users into calling fraudulent companies that would charge for “technical support.”

Fake Tech Support Scams - How to Protect Yourself

Scareware will often work to steal your credit card information, personal details, and other financial information. Identity theft is also a common result of scareware attacks. Moreover, some scareware will attempt to take control of your computer which will turn it into a “zombie” machine that will send out spam to other computers.

There are numerous known scareware in the market. Some examples are Total Secure 2009, AdwarePunisher, SpySheriff, and XP Antivirus 2009. These scareware are typically well-designed with the goal of fooling a user. Here’s an example from Symantec showing a fake warning from SpySheriff. 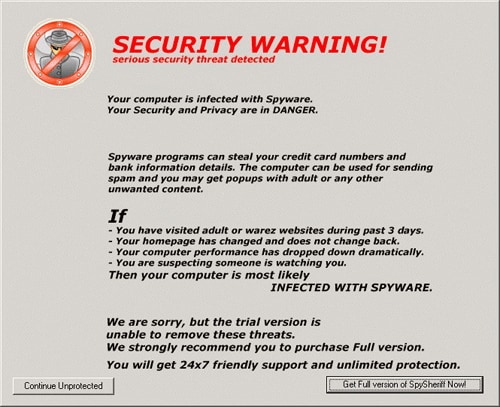 How to Detect Fake Antivirus and Remove It

How to Remove Scareware

Pop-ups and warning messages are often gateway methods to your computer. Most of the time, your computer is not yet in trouble as long as you haven’t clicked or downloaded anything yet. However, it is a good idea to conduct a full scan of your computer using your security software. Moreover, set-up a scheduled scan using anti-malware applications such as MalwareFox.

Scareware may also come with known adware, so it is important to observe the performance of your computer and network. Real-time protection will typically filter these pop-ups and error messages way before they come up.

How to Prevent Scareware

Prevention is necessary to minimize any encounters with scareware. While it is highly likely that your computer is not yet infected, it is much better not to experience the “scare” altogether.

1. Use an Updated Browser

Ensure that you are using an updated browser. Developers are often aware of these threats and will include mitigating measures to block such pop-ups. It is safe to block pop-ups altogether to avoid other threats as well. More than that, you can run tools designed to protect you from these kinds of threats. One such tool is the MalwareFox Adware Removal Tool.

Trusted sources apply to downloaded files and security solutions. Typically, infections can only infiltrate your system when you willingly allow it. Whenever you need to download files, especially software, ensure that you are downloading it from a known and trusted source.

Moreover, popular security suites and anti-malware applications are well-reviewed by third-party organizations. There’s a reason why they are popular because they work without any strings attached.

Common sense is the most powerful first-line of defense anyone can have especially when dealing with threats online. Scareware only works when you react with your emotions at the forefront. Legitimate error messages can be verified online. Moreover, it is rare for security suites to employ intrusive pop-ups to show detected issues.

Scareware is often harmless when you know how to detect them. You security suites and anti-malware applications can filter them out even before they get to you. Also, properly set-up real-time security will ensure overall protection from any threats.