Windows has the reputation of the most vulnerable operating system to malware. It is on the other hand, the most used desktop and laptop platform around the world.

You may have wondered why you always need to have an anti-virus on windows system but never on Linux or Mac OS systems. Although antivirus software is necessary for each platform, but Windows is most susceptible to attacks.

Microsoft Windows undeniably powers most of the world’s desktop computer and laptops today and has been the case for most of the years. This makes it the prime target for malware makers. It is therefore, the most vulnerable to viruses. 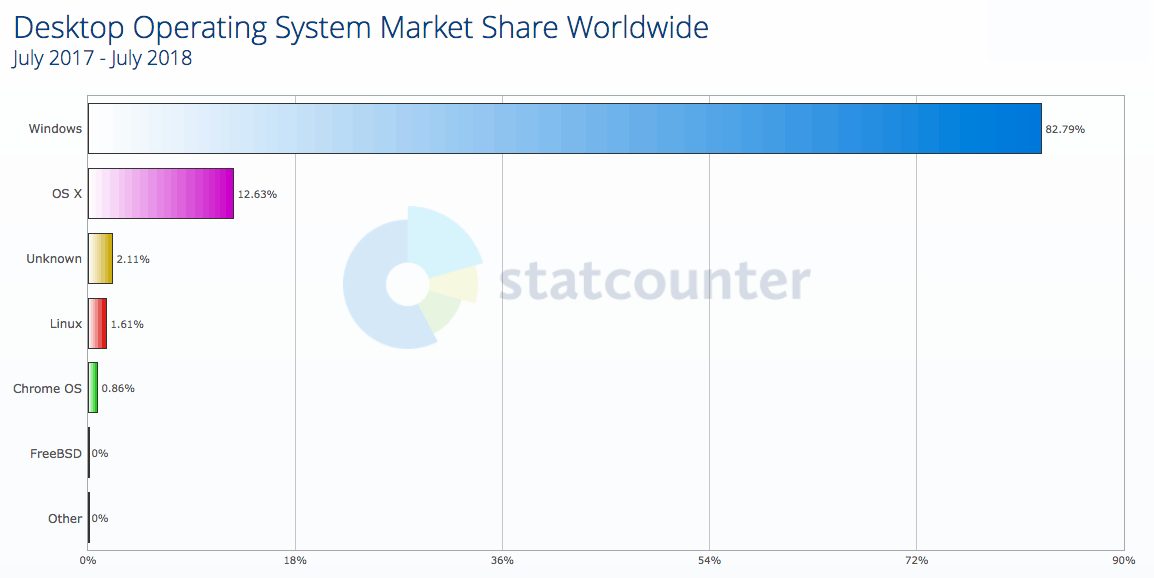 With access to most people, malicious malware creators will seek to infect average PCs with mischievous agenda like stealing credit card numbers and vital financial data. As a result, Windows has a long history of succumbing to attacks from malware but the reason for this susceptibility is not only based on its popularity and wide use but also its design. Get a Proven Anti-Malware Solution
for Windows

Initially, Microsoft was not keen on securing Windows when they first started out releasing the operating system. The original versions of Windows were open and never limited users from accessing personal data. Linux and Mac OS X, on the other hand, focused on limiting unauthorized access from scratch.

Although Windows 3.1, 95, and 98 seemed like advanced operating systems, they were based on the old DOS. It was a single-user design without proper user accounts. DOS did not offer security restrictions and proper file permissions to reinforce protection of data and the OS from intrusions.

How Secure is Windows 10?
There was no dire need for it anyway, so it took time before the company shifted its attention towards reinforcing security measures. The result was Windows NT, which became the base for later popular versions such as Windows 2000, XP, Vista, 7, 8, and 10. These are modern multi-user platforms that include security features to restrict unauthorized entry.

Unlike Windows and Mac, Linux gives users the widest range of privileges. You however, need background computer knowledge to take advantage of the privileges. This explains why Linux userbase is technical savvy (exceptions).

Most of them have extra computer technology knowledge and know more about computers than Windows and Mac users. It also explains the reason they are not as large as Windows and Mac’s userbase.

Although the products are few on the market and cannot match sales with their biggest competitors, they are effective in vital functions such as web servers. These Linux servers are effectively protected from potential attacks hence there is no need for anti-virus.

Ubuntu users, for example, are less likely to get a virus from downloading infected attachments than Windows users. Extensions such as NoScript restrict automatic running of scripts while online. With this measure, users intensify their security and make it harder to get compromised.

How To Confirm False Positive Antivirus Detection
Windows users are mostly average PC owners who know just enough to complete their daily duties. A large group of them are naïve and only use their laptops for social media, music, and movies.

Being not so tech-savvy, they easily become victim of social engineering attacks. There are many other factors which contribute to their vulnerability.

Linux users enjoy security privileges not available on Windows and Mac. The Linux system demands that to execute a file, you first make it executable. This means the user sets specific permissions to enable it to run.

This makes it the most secure of the three operating systems.

You require root level access to make major changes to your PC. Majority of the users therefore, log into the root account whenever they need to make specific permissions or restrictions. The rest of time, they use their normal account.

Latest Windows versions also have multiple accounts system; the administrator and normal user accounts. However, almost all the users only use their main administrator account ignorant of the security privileges that normal accounts provide.

The security system is exposed and easily tampered with. This is not the case in Linux because it is only until you log into the root account that you can make critical changes.

Is Windows Defender Enough?
Microsoft’s seriousness with their security was revealed in their release of Windows XP Service Park 2 and the subsequent versions. Since then, the later versions came with powerful firewalls and other security features like the security center that keeps reminding users to install antivirus programs to intensify their security.

It is safe to conclude that there are many contributing factors that make Windows the most vulnerable OS to viruses. There is no distinct reason for its weak security system. Still it continues to lead its competitors as the most popular among average users even with the introduction of smartphones.

This means they also maintain their rank as the most targeted operating system. Users in developed countries are rapidly switching to Macintosh and as a result, turning the focus of malware creators towards the Mac users.

Most naïve users continue to survive with their machines as they increase the risk of exposing private and confidential information to mischievous malware authors. Tech savvy individuals mostly choose other versions outside Windows but they form a small and insignificant population compared to global average Windows users.