The doxxing comes from ‘dropping docs’ which is used to take revenge by dropping malicious documents. If you are like most internet users, who are unaware of doxxing, then continue reading.

Doxxing is a type of cyber attack that involves searching and posting personal and identifiable information about an individual. Attacker discovers personal information and identity of a person and makes it public. Usually, the intent behind making private information public is malicious, but it is also used to aid law enforcement, risk analysis, business analysis, and vigilante justice.

Usually the attacker research and analyzes the information you posted online and reveals your identity. The doxxer checks your social media posts on Facebook, Twitter, Instagram, MySpace, etc. You might think that you haven’t published your identity online, but the attackers could guess and relate several posts to know your location and name. They can guess it from social check-ins, posts, and comments.

People post too much personal information online. They don’t think that someone could use that information against them. That’s the reason the doxxer gets the chance to harass them.

There are various reasons that someone could dox. Most of the time they want to harass the other people. Doxxer targets famous people on the internet; politicians, celebrities, journalists, social media influencers, YouTube celebrities are the prime targets. The attacker could reveal their identity, mobile number, partner’s name, personal pictures in public. They do this to get attention and make their group popular.

Sometimes, if you come in the way of someone, they could dox you to take revenge. Also, attackers dox to reveal the scam which is categorized as vigilante justice.

Are you at Risk?

A typical internet user is not at risk of doxxing unless they give someone a chance. You are safe from doxxing unless until you put your nose in someone else work. The most common motive for doxxing is revenge. The other reasons are protest, control, or malicious intent. So if you don’t give motivations to the attackers, you are not at risk.

Often the doxxer looks for new targets as it becomes their way of entertainment. So, you should always minimize the information you share on the internet.

Below are some famous cases of doxxing.

A Reddit account Violentacrez use to troll people by posting sexualized and offending images. He used to post pictures of underage girls on the platform. A journalist Adrian Chen from Gawker linked the Violentacrez account with Michael Brutsch. He revealed the identity of the user behind the troll account. Due to this, Michael lost his job and faced public shaming.

Jessi Slaughter, a teenage girl, paid a huge price to post the series of YouTube video against 4Chan website. Her personal details were posted online alleging that she had sex with a member of a band. She started getting attacked online and physically through the phone call, email, and chat apps.

Her father tried to save her and posted a video threatening the attackers. A year after this incident, her father died due to a stress-induced heart attack. After that, the girl was taken to the mental institutions.

Swatting is making a prank call to the police officials about a severe incident mentioning the address of another person which is obtained using doxxing. In 2017, doxxing and swatting leads Andrew Finch to death. Two Call of Duty gamers argued and put a bet of $1.50 to do swatting. A user provided the address of Finch’s home.

Tyler Barris called the police and gave Finch’s address saying there have been a murder and a hostage situation. The Police later shot Finch when he comes out of the house.

Not particularly, Doxxing is not illegal. It is merely collecting the information that is already available in public. So no one can put you behind the prison if you post the data which is available for the public. But, how you use the information comes under the laws.

If you use the information to stalk, harras, identity theft, and financial gain then it is illegal. You can face severe charges in such situations. Where simply doxxing is not unlawful, but it is morally unethical. We should respect the privacy of other people.

How to Avoid It?

The first rule is to not engage with people especially a doxxer to avoid getting doxxed. You shouldn’t give people a chance, so they have the motive to dox you. The other way to stay away from doxxing is to minimize the information you share publicly. Follow the below exercises to do that.

We often share too much on social media. We should limit the information that we share on these platforms. Almost, all the social media platform have privacy settings. You should use them to restrict the access to your sensitive information from prying eyes. Always add people in your social media accounts, if you know them personally.

Your IP Address could reveal a lot about you. It could tell the identity and location. So, it is better to mask your IP address using a VPN. It hides your real IP Address and location when you access shady services online.

Do not use the same username on all your online accounts. So that people cannot know your identity relating to different platforms account. Also, use strong and different passwords for your accounts and use multi-factor authorization to prevent any unauthorized access.

How to Set Strong but Memorable Passwords?

Protect your Information from WhoIs 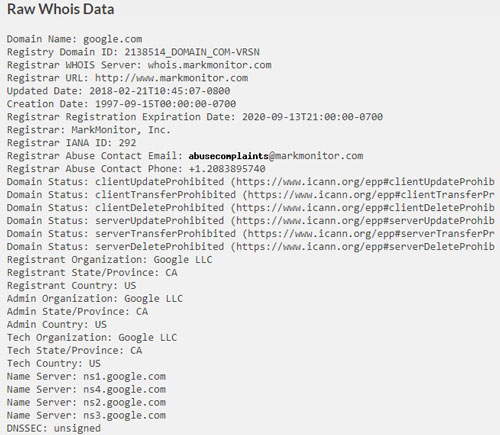 When you register a website your information like name, phone number, and address is made to the public on the WhoIs database. So anyone can access this information. Use fake details to register a website, or use privacy protection service on domain registration websites. 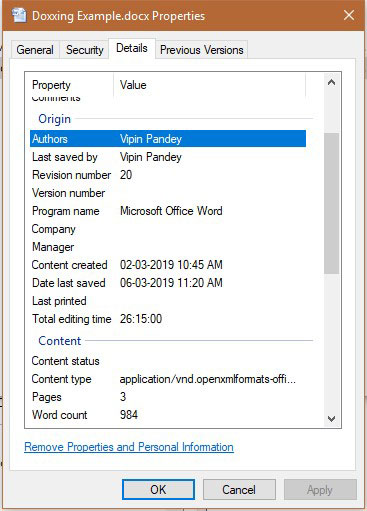 The documents you share online contains metadata. The word document contains the author name, company name, and total editing time. The images reveal too much like the camera, resolution, owner, time it was taken, and even the location if your GPS was on. Even PDF files contain metadata that can reveal the identity of the author. So stay cautious while sharing documents online.

How to Remove Google from your Life