Every day, your machine is vulnerable to countless attacks. Hackers are getting better at taking advantage of weaknesses in your system. You encounter threats even when you are just browsing casually. It is necessary to effectively set-up anti-malware to protect yourself from the ever-evolving threats online.

There are several options on an excellent anti-malware. Sometimes, it becomes overwhelming to choose which one is the best. Anti-malware applications also have different ways of protecting your computer. In this article, we’ll look at two popular security programs: Hitman Pro and Malwarebytes.

Malwarebytes clocks in at around 80MB while Hitman Pro is about 10MB. Not an issue of a right DSL connection, but it does make a difference in the limited internet or when using data. However, the small size of Hitman Pro is caused by its process of protection discussed below.

Installation of both programs is straightforward and easy. It is good to note that there are no unnecessary applications bundled during installation.

Malwarebytes needs to be installed on your system to run. On the other hand, Hitman Pro comes in both standard installation and portable app. That means you have the option to use the mobile version without installing it. It proves advantageous when your computer has any malware which blocks the installation of security programs.

Both Hitman Pro and Malwarebytes complement any primary, full-suite security applications. They run on most Windows systems. The apps also offer trials and varying limited functions in their free versions.

Hitman Pro, along with its separate real-time protection Hitman.Alert, uses cloud technology to scan and identify threats on your computer. It uploads suspicious files in its servers and uses scan engines like Emsisoft, PrevX, Dr. Web, G Data and Ikarus to identify malware.

Which means, it needs an Internet connection to work. Contrary to Hitman Pro, Malwarebytes provides on-demand malware detection even without Internet connection. It uses its database to identify threats to your system. You will only need Internet when updating its definition files.

The two anti-malware offer more features in their premium version. Malwarebytes Premium protects your system in real-time. It also has anti-exploit and anti-ransomware features. During web browsing, its website protection alerts you when a website contains malicious web pages.

It also has anti-rootkit removal and repair capabilities. Meanwhile, the paid version of Hitman Pro only offers advanced malware removal and potentially unwanted application (PUA) removal. You will need to purchase the standalone HitmanPro.Alert for more real-time features.

HitmanPro.Alert protects your system from new and developing malware, including ransomware. It also blocks phishing attacks and questionable websites. Additionally, it has online banking protection which is certified by MRG Effitas. It also prevents hacking on your webcam, microphone, and keystrokes. For some, this might be a good reason to pay the additional $34.95 on top of the standard version of Hitman Pro. 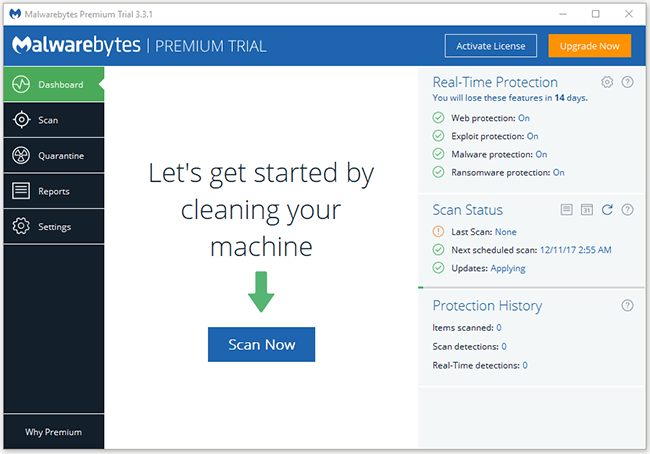 Hitman Pro and Malwarebytes have different approaches in their user interface. Malwarebytes employs the traditional tabbed window. Each tab corresponds to an action or report. It also shows your protection status on the Dashboard. It makes it easy to see what is going on your system. During active scanning, Malwarebytes shows you which part of your computer it is scanning for threats. 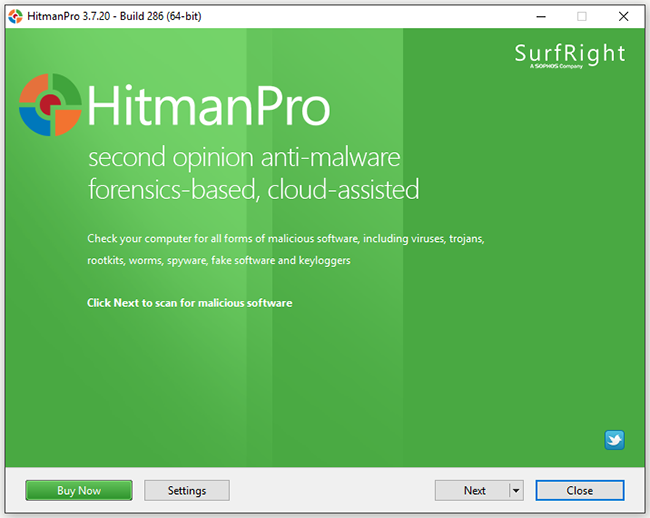 Hitman Pro has a minimalist user interface. You will see a simple window with three buttons (excluding the Buy Now button) upon execution of the application. Scanning is just a matter of clicking Next. You can find the settings and other functions in another window by clicking the Settings button. You can also see scan reports and history of past system scans.

We both conducted a scan on a reasonably new Windows 10 system to check Hitman Pro and Malwarebytes’ effect on system resources. Both anti-malware programs ran smoothly during an active scan. There is no noticeable lag while using other applications. You can quickly open other programs while the security apps are running in the background. 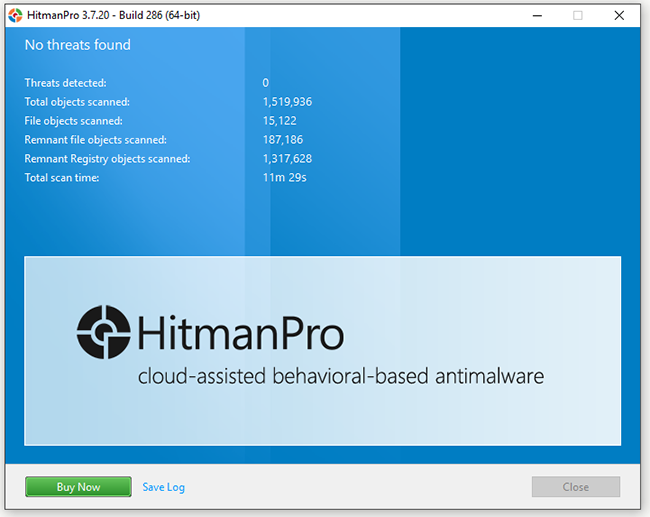 Both Hitman Pro and Malwarebytes employ “Smart Scan” method which scans all critical files in your system. Malwarebytes finished scanning in a little over four minutes; While Hitman Pro took 11 minutes and 29 seconds. However, Hitman Pro scanned a total of more than 1.5 million system objects.

On the other hand, Malwarebytes focused on more critical files and scanned around 280,000 objects in the computer. The two applications have the option for “Deep Scan” which scans your entire system and usually takes a while to finish. 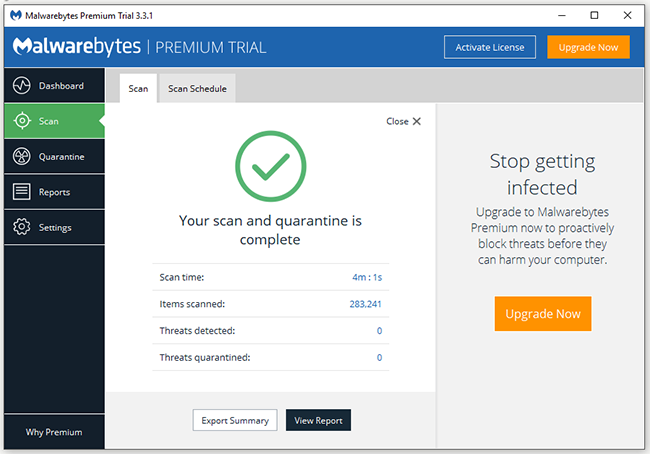 Malwarebytes have undergone testing through the AV-Comparatives program. The anti-malware, along with other security suites, was tested against several samples of ransomware and malware types. It scored decently in detecting malware with 99.2% accuracy. It is on the low-end when it comes to identifying ransomware at 95.1%. However, it did not raise any false alarms like other security applications.

Hitman Pro itself has no existing laboratory test results. It is because of its newer method of protection using cloud technology that makes it challenging to test. AV-Comparisons have just begun experimenting with similar security programs like Webroot. However, services used by Hitman Pro like G Data and Emsisoft have scored well in laboratory tests.

G Data was trialed alongside Malwarebytes in the same test and yielded 100% in detecting ransomware and malware. Additionally, Emsisoft gets an award by AV-Comparatives an Advanced+, the highest possible rating given by the laboratory, in File Detection. It also garnered an Advance rate regarding real-world protection test.

Download and installation are straightforward. With just around 5MB, even the most challenged connection can download a copy. Installation is quick and painless as well. MalwareFox balances the minimal but informative interface. Each window focuses on valuable information showing the protection of your system.

The anti-malware application packs a lot of features at its affordable price. The free version after the trial already scans, detects, and removes malware on your system efficiently. Tests show that it can efficiently identify and eliminate threats. It does not take your system’s resources at all. MalwareFox even proved to be more efficient than Windows Defender at catching real-time malicious activities.

It barely uses memory and processing power when it is idle. During an active scan, it will require a fair amount of computing power, but scanning takes less than 5 minutes.

It is powerful enough to protect your system from ransomware attacks. It catches and blocks even those still unknown threats. MalwareFox’s Zero Day Attack Protection analyzes suspicious files before it gets time to affect your computer.

MalwareFox even protects your browsing activities. It removes Adware, pop-ups, and toolbars which are potentially dangerous. It does not only protect your system but efficiently optimized it by eliminating unnecessary processes which hog memory.

Considering the performance of popular anti-malware applications is essential. Your protection should be a top priority. Your chosen security system should not only detect and remove malicious files. It should also protect you while browsing before threats can even reach your machine. As they say, prevention is better than cure.

9 thoughts on “Hitman Pro vs Malwarebytes”